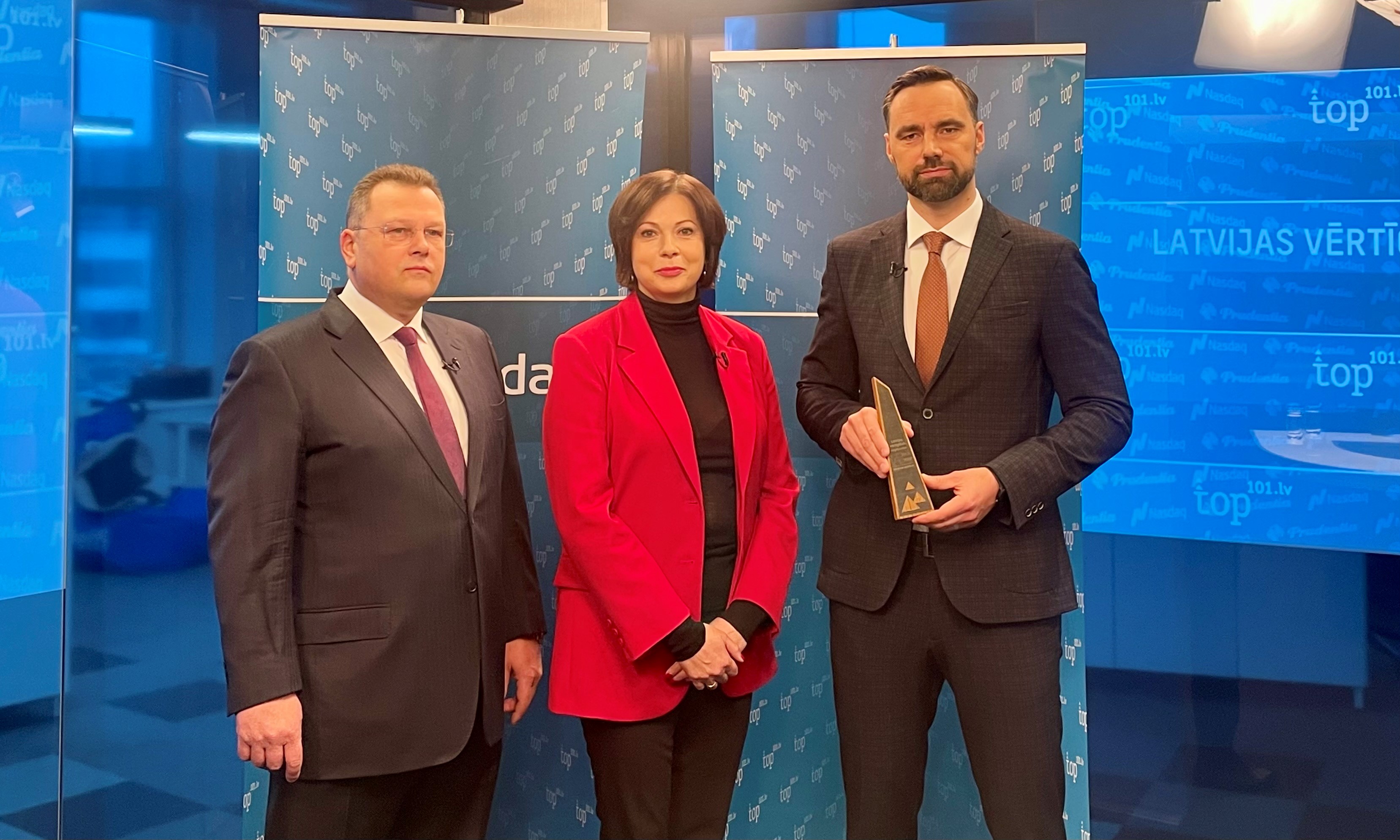 Today, on November 30, TOP101 of the most valuable Latvian companies in 2022 has been published by Nasdaq Riga and Prudentia. The status of this year’s most valuable Latvian company has been awarded to Swedbank Baltics followed by AS Latvenergo, a long-time leader of the top, and AS Latvia’s State Forests takes the third position. Although the TOP3 companies include two public capital companies, the number of private companies with local capital in this year’s TOP101 increased by 20% as compared to the public companies. It should be mentioned that the vast majority, i.e. 54.5%, of companies included in the top are nevertheless companies with foreign capital.

In 2022, the total value of the most valuable Latvian companies included in TOP101 reached EUR 25.2 bn, and as compared to the preceding year’s list, this year, the total value increased by 12%.

TOP101 includes 16 newcomers with the total value equal to EUR 4,631.2 mn particularly this year’s the most valuable Latvian company, Swedbank Baltics AS, that after having consolidated all operations of Swedbank in the Baltic States in one company, accounts for 68% of the total value of this year’s new TOP101 participants.

The 2nd position in the TOP101 has been taken by a long-time top leader, AS Latvenergo, with the record high company value totalling to EUR 2.452 bn, i.e. by 19% more than in the preceding year.

The last in TOP3 the most valuable companies is one more public capital company, Latvijas valsts meži, which value totals to EUR 1.341 bn after rapid growth in the preceding year, marked by 8% decrease in its value.

It should be mentioned that the IT company, SIA Mikrotīkls, overcame the EUR 1 bn threshold in the preceding year as a private capital company. This year, it has demonstrated a new record, having reached 5% growth in its value totalling to EUR 1.308 bn.

This year’s greatest breakthrough was SIA Gaujas Koks that has managed to increase its value by 150% this year, thus attaining the value totalling to EUR 231.18 mn.

In spite of the overall growth in the value of TOP101 companies, the threshold for entering to the top decreased by EUR 7.27 mn or by 10% as the minimum value of the company has dropped to EUR 65.61 mn. This demonstrates weakening economic development trends both in the Latvian and European market.

“I am really content that Swedish Swedbank AB Group has chosen Latvia as a country to consolidate all business assets in the Baltic States. With 3 banks, insurance, leasing and other companies, Swedbank Baltics AS has not only become one of the major companies in the Baltic State in terms of the capital, but also took the highest position in the TOP101 Latvian most valuable companies,” Karlis Krastins, Leading Partner of AS Prudentia that forms the list.

Receiving the award of the most valuable Latvian company, representative of Swedbank Baltics, Chairman of the Board of Swedbank Latvija, Lauris Mencis, stresses: “When creating Swedbank Baltics, our goal was to develop such a business model that would allow to use unique features of each Baltic State for the most efficient performance and convenience of our customers. Swedbank’s history means 200 years’ old traditions. And, in my opinion, it is crucial that this business with its huge experience is hosted by the Baltic States and particularly Latvia. To me, the fact that Swedbank Baltics is registered in Latvia once again evidences that Latvia is the centre of the Baltic States, and our country attracts major foreign investments. This creates new business opportunities and allows generating new ideas. Being recognised as the most valuable company in Latvia, Swedbank Baltics sets a benchmark for how much can be achieved in the Latvian business environment not only at the national, but also at the regional scale.

“The investors’ demand and offer ratio at the stock exchange defines the company’s value most exactly. We are glad for all TOP101 companies and are particularly happy for every listed company included in the TOP among the most valuable companies in Latvia, this year these are several issuers. Those companies that have enough courage, ambitions and - the most important - willingness to develop investing in their own and public wellbeing are waited at the stock exchange!” Head Nasdaq Riga Daiga Auziņa-Melalksne notes.